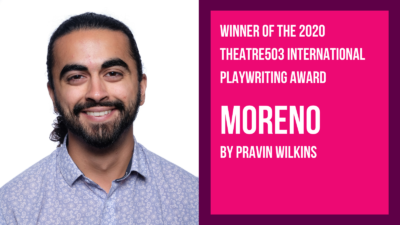 We are delighted to announce that the winner of the 2020 Theatre503 International Playwriting Award is Pravin Wilkins, for his stunning play Moreno. A panel of judges selected the winning play from five finalists, chaired by Erica Whyman (Chair of Theatre503 and deputy artistic director, RSC) with producer Caro Newling, actor/director Daniel Evans, arts journalist and reviewer Sam Marlowe, playwrights Roy Williams and Vinay Patel, and Theatre503 artistic director Lisa Spirling.

The five outstanding new writers who made up the finalists hailed from the UK, Australia and the US and the remaining four were  Ayad Andrews, Gina Stevensen, Safaa Benson-Effiom and Zoe Ashford Cooper. They were chosen from 1,719 scripts sent in from 45 countries.

You can read the full announcement here

Ayad Andrews was born in Baghdad, Iraq and lived there until the early 1970s when his family were forced to flee the country due to threats from the then-ruling Ba’ath Party regime. Originally a technician in the TV industry, he changed career in 2003 to work in marketing and publicity, mainly for the arts. He was selected for the BBC Writers room ‘Drama Room 2019/20’ scheme and is part of the London Library ‘Emerging Writers’ programme for 2020/2021.

2003, Basra, Iraq. For young Iraqi student Tawfeeq, the second Gulf War is the chance to be a part of revolutionary change, an opportunity to help set all Iraqis free from the tyranny of Saddam’s reign. All he has to do is assist the Coalition Forces by being a terp – an interpreter. But that fateful decision is about to change his and his loved ones’ lives forever.

Gina Stevenson is a playwright, dramaturg, and writing instructor. Her plays have been developed in NYC and regionally with American Stage, Urban Stages, Williamstown Theatre Festival, Hartford Stage, The Tank, Isle of Shoals, and The Joust Theatre Company. She has been a finalist for a number of other prestigious awards in the US.

Within the confines of an Orthodox Jewish community in Brooklyn, a new generation of women is pushing the boundaries. Esther grew up in a loving and religious household, but she is seventeen now and can feel a larger world outside her own. Will her questioning take her too far to come home?

Pravin Wilkins is a playwright, poet, and fiction writer from San Diego, California, whose works typically deal with race and class struggle – and the many intersections between. In May 2020, Pravin received his MFA in Dramatic Writing from Carnegie Mellon’s School of Drama. Currently, he is a Fall 2020 Writer-in-Residence at City Books in Pittsburgh, where he is continuing his work as a writer and activist. Moreno was a finalist for the National Playwrights’ Conference at the Eugene O’Neill Theatre Center.

American football star Luis Moreno is struggling to overcome an injury and prove he still has what it takes. The league is shaken by Colin Kaepernick’s monumental decision. Will Luis take a risk and use his platform to take a stand as well? More than that, does the movement have room for him and the issues he wants to bring to the table?

Safaa Benson-Effiom is a writer and theatre-maker from London. Her work as been staged at The Bunker, Southwark Playhouse and as part of Talawa Firsts and the RADA Festival. She is a part of the current Tamasha Playwrights cohort and an alumni of the Soho Theatre Writers’ Lab.

Til Death Do Us Part

As they prepare for the worst day of their lives, Daniel and Sylvia are finally forced into confrontation. With so much left unsaid for so long, they must reckon with the circumstances that brought them to this point and in fact, whether there can be a ‘them’ going forward…

Zoe Ashford Cooper is a writer based in Sydney, Australia. She is a graduate of the Writing for Performance program at the National Institute of Dramatic Art (NIDA) and holds a BA in Performance Studies from Curtin University. Zoe has completed a Dramaturgy Internship with Playwriting Australia, assessing scripts for the National Play Festival. In 2017 she was a finalist in the Rodney Seaborn Playwrights’ Award, and in 2018 she was a finalist and Highly Commended in the Max Afford Playwrights’ Award. for unknown reasons is her first play.

Set over the course of five months, for unknown reasons is an epic play about love and an unexpected journey across the globe. Something is about to happen to a family that will change all their lives irrevocably, as scenes of domestic family life in a rural Australian town melt away, revealing disconnection, fragile relationships, and the fleeting nature of time.

The winner receives £6,000 and a world premiere production at Theatre503 after a year’s support and development, with their play published by Samuel French Ltd, a Concord Theatricals company. They will follow Paul Murphy (Valhalla) and Bea Roberts (And Then Come The Nightjars) – joint winners in 2014, Andrew Thompson (In Event of Moone Disaster, 2016) and Danusia Samal (Out of Sorts, 2018).

The Theatre503 International Playwriting Award was established in 2014 and is an unprecedented opportunity for emerging playwrights to be recognised for writing an outstanding, original piece of work for the stage. It builds upon the foundation of the venue’s reputation for engaging with the next generation of playwrights. This award has been made possible by the generous support of The Carne Trust, and new publishing partners Samuel French Ltd, a Concord Theatricals company.